In the week of the biggest day in Australian Sport, the AFL Grand Final, I thought I’d share some insights into AFL’s greyest of grey areas: the holding the ball rule! I hope to give you a working knowledge of this treacherous protocol, and gain you instant cred with native fans of Australia’s great game.

I do need to point out at this time that I am a New South Welshman, so some might question my credibility. I’m hoping my 3 year, 24 game, AFL Career in Sydney’s 5 Division, where I had an average disposal count of seven, gives me the right to speak on the subject. It’s maybe the 33+ years watching the game and seeing how this rule has evolved that makes me want to chat about it now, and help with the confusion that abounds.

Rules rule
So you understand some of the basics of AFL. Just to recap:

Confusion
If you’re confused by some of the rules, you’re in good company. Many an umpire has fallen foul…

I think this quote best sums up the holding the ball rule:

“The holding the ball rule dates to the formative years of the game. It has a long history as one of the most contentious rules in the game, and one of the most difficult to umpire consistently, in large part due to the several points of umpire discretion involved in its interpretation.”

The Concept of Prior Opportunity
This is one of the most important yet conjectural aspects of understanding the rule. The question is: did the player with the ball have a chance to get rid of the ball correctly (handball or kick) prior to getting tackled correctly (lower than shoulders, above knees)? In other words, did the ball carrier choose to take the tackler on?

“BALL”!
What’s that they are yelling? It’s “BALL!”, as in, “Holding the ball!” You get the Sherrin, you’ve got to get rid of it, and correctly. It’s probably the most empassioned cry you will hear at any footy game.

The Umpires have swallowed their whistle!
Now things are slowly becoming clearer, and you’ve seen the perfect scenario on the field:

Go for it! You proudly yell… “BALL!”, but no whistle ensues from the umpire. Why not?

It’s not an exact science. And it’s down to the three field umpires’ interpretation. Sometimes the pressure of giving a free kick for holding the ball is just too great, with over 90,000 baying fans. They might also be unsighted or overruled by one of the other field umpires on the call.

This is the signal you are looking for. As a fan, it can be blissful or devastating.

Final Thoughts
Don’t be too hard on yourself if you still don’t entirely get it. It really is all down to those three brave men in the middle. It is becoming more widely accepted that AFL umpires have an unbelievably hard job, having to interpret rapid and complex actions on the fly in front of hordes of passionate fans.

It all boils down to being a matter of opinion. And yours is just as good as anyone’s, so have a go.

I hope you enjoy the Grand Final on Saturday! 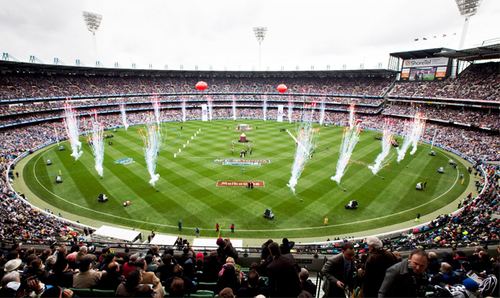 Making the Most of Your Commute to Work

5 Healthy Hobbies that Help Your Career