Our Administration Manager, Sophie, is a member of the Achilles Running Group. A group that brings together vision impaired people with fully sighted volunteers who guide them while running.

Last weekend, I was lucky enough to take part in the Great Ocean Road Running Festival with Achilles Running Group. The running community of Victoria and beyond came together to pit their wits against the iconic windy road that gives such amazing views and the occasional queasy stomach (car-sickness anyone?).

The beautiful and normally quiet towns of Lorne, Skenes Creek and Apollo Bay hosted more than 8200 runners, and of course all of their family and friends who came along as support crew!

This event is for everyone! There’s a race for all running abilities, each giving their own challenges to overcome. Whether it’s long and slow inclines; steep hills, crazy angled camber, getting up at 4.30am, being shuttle-bussed to the start line, starting at 1pm in the full afternoon sun, a finish line 60km after the start line (those ultra-runners are nuts), it all adds up to an amazing sense of achievement when you cross that finish line.

I entered the Garmin 14km Paradise Run, and I must admit, my preparation was not as thorough as it could have been, which probably explained the major butterflies in my stomach in the lead up to the race (I couldn’t blame it all on the windy drive down). Talking to my Achilles friends, I found that most people have this, and it’s usually due to excitement and anticipation. I was paired with Achilles guide Stephanie, and we were joined by Deb, another Achilles guide who was running her own race but decided to help out and ‘bulldoze’ for us. 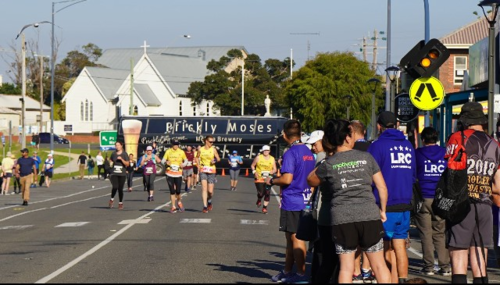 Our race started later in the day, which was different for me – I couldn’t work out when I should eat and what I should eat. In the end I opted for eggs and yoghurt for breakfast (not in the same bowl… ew) and an apple just before the run.

Along with five other Achilles teams we set off from the Apollo Bay Pub, and then after about 300 metres our route veered right and we were heading inland. Wait, we’re not actually running on the Great Ocean Road? Huh! In fact, any feelings of being cheated quickly dissipated. We ran through beautiful peaceful cow pasture areas and up into the fresh cool forest area of Paradise. It was equally as scenic as the beach-side routes the other runs took, and being the tree-lover I am it was pure happiness to be running on the road under the trees and alongside a sparkling creek.

Side-bar: I must admit that, looking up across the route in front of us and seeing thousands of people snaking along through the fields, I had a momentary thought “aren’t humans stupid?” What other animal does this? Gathers in huge numbers and runs along together in the same direction just for fun?! We are a strange race!

My goal was to finish in under 2 hours, and I managed 1 hr 45 minutes…plus I managed to run most of the way, with only a couple of walking breaks needed towards the end. I’m so pleased with myself, and it’s motivated me to improve my running and aim for more! 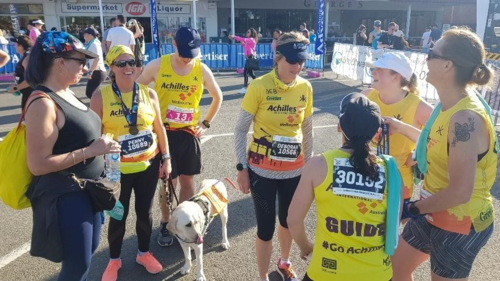 My running club Achilles actually had 42 people (combined vision impaired people and volunteer guides) entered in races over the weekend, so there was always someone to cheer on even if your race was done. 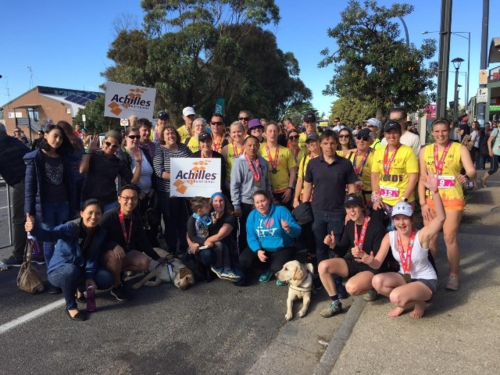 Let me tell you, if you want to see emotion, go hang out at the finish line of a marathon. All the FEELS! I saw women being greeted by their proud husbands and smiling children, who then grabbed hands and ran across the finish line with them, extraordinary men in their 70's and older being supported by their daughters, young teenagers being filmed by their extremely vocal friends, and so many running group members all looking out for their comrades. Supporters were running back and forth coaching their friends and family down that last 100 metres, and not to forget my very own vision impaired pals who came in strong, flanked by their Achilles guides who had been with them every step of the way.

The support out there was immense. I swear, if you think the closing scene of Love Actually is heart-warming, you need to see this for yourself. Whether you’re a runner or not, you can’t deny that running a marathon is a huge achievement and deserves all the admiration, love and celebration that comes from those that crowd the finish tunnel.

So if you’ve ever thought about participating in such an event, I strongly urge you to try it out. It’s much more fun than it sounds, you are guaranteed to make some new friends and there are even events for the whole family! What’s a little friendly competition between siblings and parents?

Here are the go-to fun runs for the family near you:

The annual Sunday Mail Bridge to Brisbane on Sunday, 25 August 2019 is Queensland's largest fun run. Enjoy a variety of Brisbane’s most iconic landmarks including running over the Story Bridge and finishing at the beautiful South Bank Parklands.

Alternatively, you can make the trip to the Gold Coast and run for the good times at the 41st Gold Coast Marathon from Saturday, 6 July to Sunday, 7 July 2019.

The Medibank Melbourne Marathon Festival returns on Sunday, 13 October 2019 with a festival of running made for any age and type of runner.

You can find plenty of other Melbourne fun run events here.

The Sun-Herald City2Surf presented by Westpac is back, on Sunday, 11 August 2019, running 14km from Hyde Park in Sydney's CBD to the finish at Bondi Beach. Over 80,000 participants are expected to lace up their running shoes and participate in the 2019 edition of the World’s Largest Fun Run!

The Blackmores Sydney Running Festival on Sunday, 15 September 2019 is an annual running and walking event with a range of distances to suit everyone, all of which run over the Sydney Harbour Bridge.

Making the Most of Your Commute to Work

5 Healthy Hobbies that Help Your Career